In 2007, Ohio was assessed as falling short in 93% of the American Bar Association (ABA) standards for a fair and accurate state death penalty system.

In 2011 Ohio Supreme Court Chief Justice Maureen O’Connor created the Joint Task Force to Review the Administration of Ohio’s Death Penalty in response to the overwhelming deficits that were outlined in the 2007 ABA report. The Task Force was comprised of judges, prosecutors, defense attorneys and academics. These experts met and discussed the many problems presented in the ABA report. After two years of review, the Task Force concluded its work in November of 2013 and subsequently published its findings in April of 2014. 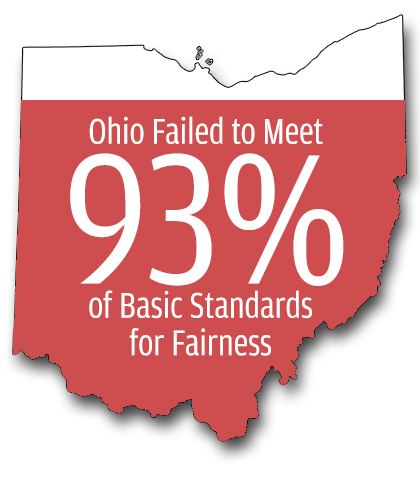 There were 56 Recommendations; some very extensive in scope, others very segmented so as to cover a single topic area in multiple recommendations.

One of those single topic areas addressed through multiple recommendations was post-conviction relief practice/procedure – 6 recommendations (# 23 to 28) addressed this. Five (#24 -28) were enacted in a single piece of legislation S.B. 139, effective April 6, 2017. Changes were to extend the filing deadline, remove page limitations on the petition for relief, provide that a copy of the trial record is maintained at the county court level for use in the litigation, require that a judge make specific findings, and allow for the taking of depositions and subpoenas.

Recommendation 19 was to create a study commission to study how best to support the families of murder victims. This was the first recommendation enacted, in the 130th General Assembly H.B. 663, sec. 6, effective March 23, 2015, as part of a bill addressing execution by lethal injection and providing for secrecy respecting the suppliers of drugs.

Recommendation 46 was to require that a judge prepare and provide written jury instructions to the jury in capital cases. This was enacted in the above H.B. 633, amending ORC 2945.10.

Recommendations 16, 53, and 54 all addressed, in part, providing for a uniform attorney fee schedule for all private defense counsel appointed to capital cases. In H.B. 633, the legislature enacted ORC 120.33 (D), which called for this. Later, 2016 legislation created the capital case attorney fee council to set a unified capital case hourly rate for appointed counsel in all counties in all stages of capital litigation. A uniform increased hourly fee has been set by that body, to take effect in Sept. 2017. It is uncertain if this also impliedly addresses Recommendation 42, which recommended the legislature recognize a right to counsel in clemency proceedings. (The July 11, 2017 memo drafted by the Ohio Public Defender does not mention clemency when listing stages of capital litigation, but does state “and any other death penalty litigation carried out at the state level”.) Other aspects of Recommendations 53 and 54, dealing with expenses, have not been addressed.

AMONG KEY RECOMMENDATIONS THAT WERE NOT ADDRESSED ARE THE FOLLOWING:

1. Any in-custody interrogation shall be electronically recorded, or if not, statements are presumed involuntary.

2. Require that each coroner’s office become accredited or have at least one person on staff or under contract who is a fellow of that organization, or have a contract with an accredited crime lab to perform specialized services when the need arises.

3. In a death-eligible case, excepting fingerprint evidence, if evidence is not originally reviewed by an accredited lab, the defense has a right to testing in an accredited lab at state expense, and no reference will be made to the first test (except to establish the evidence has been in the custody of the state). If testing of evidence prior to indictment will likely entail total consumption or destruction of evidence, the test must be performed in an accredited lab; and if it is to be tested after indictment, notice must first be given to all parties. If this requirement is not followed, the evidence is presumptively inadmissible unless good cause is shown to the trial court. On the request of the prosecution in a death penalty case, defense forensic experts shall also be required to rely on testing by accredited labs.

4. All crime labs in Ohio must be certified by a recognized agency defined by the Ohio legislature.

5. Enact legislation to require, prospectively, meaningful proportionality review to include cases where death was sought in the charges but not imposed; data also to be collected on all death-eligible homicides.

6. Mandating data to be collected on all death-eligible homicides.

7. Amend legislation (R.C. 2929.03(F) to include the prosecutor preparing a report on the rationale for any plea agreement in a case charged capitally that ends in a penalty less than death, and providing this to the Ohio Supreme Court.

8. Enact legislation to consider and exclude from eligibility for the death penalty defendants who suffer from “serious mental illness,” as defined by the legislature, at the time of the crime.

9. Enact legislation to exclude from eligibility from the death penalty defendants who suffer from “serious mental illness,” at the time of execution.

11. Adopt the 2003 ABA Guidelines for the Appointment and Performance of Defense Counsel in Death Penalty Cases (and train counsel and judges on these).

12. Adopt the 2003 ABA Guidelines for the Mitigation Function of Defense Teams in Death Penalty Cases (and train counsel and judges on these).

13. Enact and fund a capital litigation fund to pay for all costs, fees, and expenses.

14. Increase funding to the Office of the Ohio Public Defender to allow for additional hiring and training of qualified capital case attorneys who could be made available to all Ohio counties, except in circumstances where a conflict of interest arises.

15. Implement and fund a statewide public defender system for representation in all levels of capital cases except when a conflict of interest arises, when Rule 20 qualified counsel shall be appointed.

16. Private defense counsel appointed to represent death-eligible or death-sentenced defendants are to be equally paid throughout the State regardless of the location of the offense.

17. Enact legislation that Death can only be imposed if the state presented DNA, video, video-taped confession, or other compelling evidence that links the defendant to the murder.

18. Bar a death sentence where the state relies solely on jailhouse informant testimony that is not independently corroborated at the guilt/innocence phase.

19. Victim’s family – the legislature should study how to best support families of murder/homicide victims in the short and long term.

20. Enact legislation to provide that a jury may try a case on retrial following reversal of a bench trial.

21. Amend Rule 20 of the Rules of Superintendence for Ohio Courts to increase in the number of continuing legal education hours for defense attorneys under Sup.R. 20.

22. Court rules shall be amended so that properly presented motion must be accepted for filing for a ruling by the court in a death penalty cases.

24. Extend the filing period for a post-conviction relief (PCR) petition from 180 days to 365 days (after filing of the trial transcript/record in the Ohio Supreme Court).

25. Judicial review and findings required regarding each claim.

28. Amend R.C. §2953.21 to provide for depositions and subpoenas during discovery and post-conviction relief.

29. Mandatory CLE for prosecutors and judges assigned to death cases on how to protect against racial bias.

30. A judge who reasonably believes a person any state actor has acted on the basis of race must report same to an appropriate supervisory authority.

31. Mandatory one hour CLE for defense counsel regarding development of race discrimination claims.

32. A defense counsel must seek recusal (asking the judge to remove themselves from hearing the case, or seeking removal by petitioning the Chief Justice of the Ohio Supreme Court), of any judge where there is a reasonable basis for concluding the judge’s decision could be affected by racially discriminatory factors.

33. Remove the following felony-murder specifications: aggravated murder in the course of kidnapping, rape, aggravated arson, aggravated robbery, and aggravated burglary as data shows death is rarely imposed and such will reduce the race (and geographic) disparity of the death penalty.

34. To address cross jurisdictional and racial discrepancy, creation of a Death Penalty Charging Committee at the Attorney General’s Office to approve or disapprove of charges.

36. Enact legislation requiring every jurisdiction to create jury pools from the list of all registered voters and all licensed drivers who are U.S. citizens.

37. Enact a court rule that mandates, for both the prosecution and defense, full and complete access in capital cases to evidence known to exist or with due diligence could be found to exist, with an opportunity to test such evidence – excluding work product, material protected under Rule 16, or inculpatory or privileged material.

39. Mandatory training for judges and mandatory pre-trial conferences on the record, as early as possible, addressing discovery, Brady disclosures, and appointment of experts (ex parte proceeding upon request of counsel regarding experts though on record), mandatory declaration of compliance by defense and prosecution with all discovery obligations and Brady.

40. The Ohio statute providing for attorney-client privilege should be amended to provide that a claim of ineffective assistance waives the privilege in order to allow full litigation of ineffectiveness claims. The waiver will be limited to the issue raised.

41. All parties will work on procedures to remove any impediments to a fair and timely resolution of death penalty cases in the Ohio courts.

42. Clemency proceedings should include a formalized right to counsel.

43. During clemency proceedings, a) & b) the proceedings and interview of inmate are to be recorded; c) inmate’s counsel allowed to counsel the client during the interview; d) Parole Board must reveal all information it considers in reaching its decision; e) inmate’s master file is to be released to inmate’s counsel 6 months before hearing; f) state and inmate’s counsel disclose and exchange all information is to be relied upon at the hearing 30 days prior to the hearing, with a continuing duty to disclose any new information to be relied upon; g) & h) adequate funding for a mental health expert if needed and for private counsel representation.

47. Improving jury instructions by making clear that the jury must always be given the option of extending mercy that arises from the evidence.

48. Improving jury instructions making clear that the process for weighing aggravating and mitigating circumstances is not a numerical one.

49. Expand and enhance training requirements to all participating legal counsel (appointed and retained) and to all Ohio judges at all levels, which could be waived in exceptional circumstances with the consent of the Ohio Supreme Court if their qualification otherwise exceed the standards required by the Rule.

50. Implementation of educational guidance for Presiding Judges as to when and how to intervene (procedure to follow) in situations of potential ineffective lawyering.

51. The Trial Judge is the appropriate authority to appoint legal counsel in a capital case.

52. Directing that the trial judge is the appropriate authority for the appointment of experts for indigent defendants.

53. Adopt a uniform process for selection of indigent counsel, including establishing a uniform fee and expense schedule.

54. Adopt a uniform process for selection of indigent counsel, including establishing a uniform fee and expense schedule, wherein the main objective should always be to assure the best educationally and experienced-qualified candidate.

55. Adopt reporting standards to provide complete transparency of record, to assure strict compliance with due process that may include unique constitutional or evidentiary issues, significant motions, plea rationale, pre-sentence investigation, to be submitted to the Ohio Supreme Court on completion of the case. [tf_popup style=”small” link=”7138″ color=”#8e8e8e” text=”#fff”]read more[/tf_popup]

56. Adopt a rule to provide for the mandatory training of attorneys and judges, the selection and appointment of indigent counsel in capital cases, and the enforcement of the ABA Guidelines for the Appointment and Performance of Defense Counsel in Death Penalty Cases and the Supplementary Guidelines for the Mitigation Function of Defense Teams. [tf_popup style=”small” link=”7138″ color=”#8e8e8e” text=”#ffffff”]read more[/tf_popup]